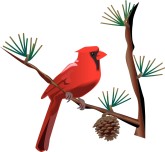 IN Prospect the best species was the CLAY COLORED SPARROW ,the week long sparrow recorded first today inside the private Quaker Cemetery; later it returned to its original spot the Maryland Monument slope lawn in the midafternoon.

Taking second place for Prospect rarity , three afternoon COMMON MERGANSERs on the Lake in the western half , two drakes and a hen were unexpected.

Sort of an off year for numbers and quantity.