With sparrows not making yet a dent for numbers in our northern Brooklyn parts, warblers flourished at Greenwood Cemetery.

At the elm tree known for its reputation along the fork at  Sylvan Waters northwest side, the tree came alive with warblers. Sean Sime reported a number of Black poll warblers supported by Yellow rumped warblers and several Red Breasted Nuthatches. The latter has been irrupting this fall, a handsome species most welcomed to see.

Meanwhile, there was reported  Purple Finches also in nice numbers this fall  and Lincolns Sparrows in Prospect Park, location unknown. 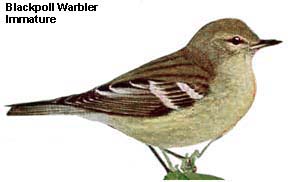