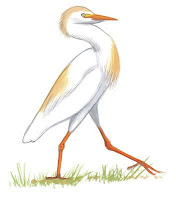 Astounding as it may sound, today Janet Zinn found the first ever CATTLE EGRET in Greenwood Cemetery.

For its very unusual location (that aroused my attention), the Cattle Egret was observed at Cypress and Dale Avenues. I searched the Cornell Ebird recs later and there's not ever a pin on the map where Greenwood is located. I say wow. If true if its the very first, kudos to Janet for the first ever seen CAEG in GWC. Its hard to believe it but there it is.

Meanwhile as it went splat with lack of species in the local parks, I saw a Ruby Throated Hummingbird sipping the Cup Flowers at Butterfly Meadow's west end in Prospect.

PS   for your curiosity, the last reported Cattle Egret in Prospect was 56 years ago. It's prospect only record