Visiting Great Britain birder ( visiting his daughter here in Brooklyn) William Earp went to Prospect Lake on the morning of July 10th and got a mighty surprise !

A CASPIAN TERN came in and stayed for a few minutes, enabling William to get off a terrific in flight shot of the large tern. This rarity comes into Prospect on very rare occasions. I believe the last one was also a July record ( a check of Ebird says 2001). I will verify the records later.

My Aol spam controls have strict protocols, hence William's email to me was rejected JUly 10th. I was notified yesterday by Janet.

Even though its slow in summer, it pays to stroll into Prospect , especially the Lake and do a watch.

Congrats to William to his terrific find!

Below are excerpts of William's report

Greetings from a visiting English birder. I have a daughter living in Crown Heights and I have met and corresponded with you on several occasions in the past few years. You have always been very helpful.

This morning I had a Caspian Tern over the Lake for a couple of minutes at about 7.30 am. It flew in from the south- east, circled a couple of times, once coming quite close to within 50m or so, and then carried on west.I was on the Peninsula, south side. I have seen Caspian in various places, in both the US and Europe,but never here. It was an adult, a very large tern with broad wings ( significantly bigger than Sandwich Tern, which is the European comparison species) black cap and large red bill.

I did manage to take an in- flight photo which I could send you a copy of if you would like verification. It will just need a bit of organisation with my daughter's computer.

I am here for another couple of weeks and will keep my eyes open for anything else. I can generally get to the Park first thing in the day.

As I said, it is an inflight record shot, and unfortunately there is nothing to convey scale. But you can see the length of the wings and get a sense of their breadth, and the bill, even in this front-on shot, looks pretty large. If you look carefully the legs and feet are black too, and the tail is minimally forked. 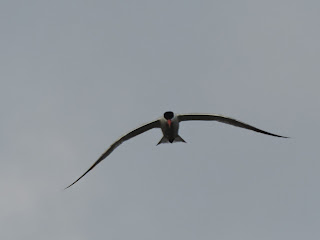 Posted by Kingsboider at 7:39 AM