First , Happy Mothers Day , even if I said it late. Rafael sent me a photo for the occasion 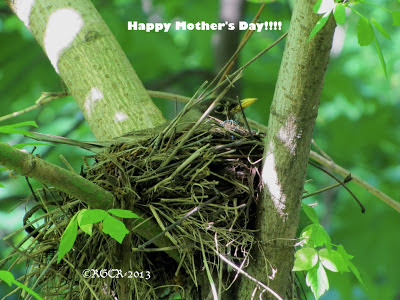 A very cooperative PROTHONOTARY WARBLER found by Kathy Toomey initially at the back area of the Lily Pool near the Boathouse proved to be the hilight today on a slower day from previous days, the "fourth day" from the breakout  starting Thursday afternoon. Overshadowing a male HOODED WARBLER  from Lookout Hill's north slope , more elusive than the Prothonotary, multiple observers were treated to a show of the "golden swamp bird" from reports I read.

Through the afternoon into evening the PROTHONOTARY hung more at the Binnen Falls section, left for awhile then reappeared for more looks.

In the morning, it wasn't as spectacular with bird numbers, but that is expected after the first wave that has petered out, so it was a surprise to see the diversity today. The HOODED WARBLER was in the dense woods of the north slope inside the curve path , did cross the road to the east side but then went back to the first spot inside the snow fence  lined mulch short steps path. Also at that spot, a very cooperative CAPE MAY WARBLER in a white flower tree, coming down from the north Pin Oak at Butterfly meadow with a pair was seen , a male and female. CAPE MAYS were reported in decent numbers up to 5  for this uncommon species that came down to eye level for this normally high species. Another HOODED WARBLER , this time a female was somewhere in the woods between the Boulder Bridge and Center  per Keir Randall. BLACKBURNIAN in the 3-5 range  topped off  diversified warbler list which I enumerated below.There is a late LOUISIANA WATERTHRUSH and WORM-EATING in the mix. Usual middle May WILSONS and CANADAS are starting to show up.Spring is passing thru fast.

All together, 24 species warblers , not big on numbers but diversity a strong showing .

Other new birds or newcomers to say the least are LEAST FLYCATCHER, WOOD PEWEE, INDIGO BUNTING & RUBY THROATED HUMMINGBIRD. The bunting was seen first by Eni and Vinnie Falci , at the hairpin turn in the path on the southwest side of the Terrace Bridge, a gorgeous male inside the fence by the water.

There are multiple reports below, including a Greenwood Cemetery BBC walk led by Dennis Hreshowsik , thanks to Dennis for leading today. Also, tweets "list" from text messages for brevity.

PS. Please note, I will post all birdathon reports on one page when I get them all....

a dozen birders were treated to fantastic weather and great looks at spring migrants on today's greenwood cemetery walk. highlights were eye level looks at 3 cape may warblers, the first of which spotted by monica berger near sylvain water way and later near cypress ave where two cape may and two magnolia showed well at eye level for several minutes. least flycatcher, heard by tom preston, put on an acrobatic display of flycatching for all to see. other quality species included blackburnian, chestnut sided and wilson's warblers, three scarlet tanagers as well as 3 rosebreasted grosbeak and 2 swainson's thrush. thanks to all for a great day of birding.
see you in the field,
dennis

View this checklist online at http://ebird.org/ebird/view/checklist?subID=S14086190

This report was generated automatically by eBird v3 (http://ebird.org)

Posted by Kingsboider at 8:43 PM