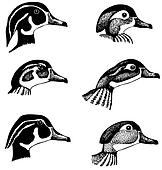 No thanks to a southwest wind,migration stalled in Prospect. Few birds and fewer warblers were observed.

On the way in, I spotted a NORTHERN WATERTHRUSH on the Lake shore. After this along with Rob Jett and Heydi Lopes up on Lookout Hill, spotted as well AMERICAN REDSTART,YELLOW WARBLER & BLACK THROATED GREEN Warblers were individual birds seen.

Likely my hilight was a gorgeous looking --with its clear perfect white  eyering on bright gray head was a female BLUE GRAY GNATCATCHER in the slope section between Butterfly Meadow and summit. A more ragged looking gnatcatcher followed the likely younger bird.

Rob and Heydi mentioned that 14 WOOD DUCKS occupied both the Upper Pool and some in Lower Pool. The BLUE WINGED TEAL hen  stuck around..

It's going to be hot the next few days and maybe a lull with birds.
Posted by Kingsboider at 9:46 AM