Ryan Goldberg found the best bird a MOURNING WARBLER inside Butterfly Meadow. It was an immature bird. Later, approximately an hour later, Rob Jett found the bird on the wall of the steps
leading up to the summit, before it shot off into the middle slope dense habitat. So much for that. Remarkably I sort of predicted earlier the bird with another birder , Ed? about "keeping your eyes open " for a Mourning in Butterfly Meadow. I wished I had the same prognostication for planning field trips . :)

There were reports of small pockets of warblers according to Ryan and Rafael. BLACKBURNIAN WARBLER observed with the flurry on Lookout Hill was among the best says Ryan.
CANADA WARBLER along the bridle trail at Quaker Ridge was Rafael' s
report. 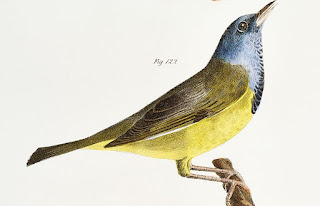