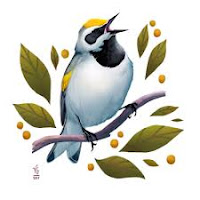 First in Prospect,Linda Ewing came up with a rare GOLDEN WINGED WARBLER at the north side of the Butterfly meadow going in and out of the trees there before yielding a complete view. This species is very rare given it's low population and oftentimes overlooked status during migration.

Continuing with prospect a PHILADELPHIA VIREO was reported as well,a very uncommon bird around this time,spotted or reported by Ryan Mandlebaum. The sighting was in the Vale Cashmere. Ryan also reported the continuing OLIVE SIDED FLYCATCHER on a snag above the Maryland Monument.

Over in Greenwood meanwhile,HOODED WARBLER is the quality bird. Found in the Dellwater by Ryan Goldberg, it was a female.

Lastly the third local the Brooklyn botanic garden had high flying observation. During the Sunday walk by Bradley Klein and Danielle Gustafson,they spotted 8 BROADWINGED HAWKS in a spiral kettle gaining height from updrafts before  beelining south. This species is going on the move for the next few weeks. My advice: keep looking up!

Update: another rarity flagged by Ebird ALDER FLYCATCHER.Details below