From intel from birders who have seen the bird, the VARIED THRUSH is frequenting the area UNDER the 25 ft tall YEW TREE behind the fence near the stairs of the north path at the Nethermead Bridge. The ground here is uncovered by current snowfall. I am told that Steve Nanz photographed a terrific picture indicating  a close bird. It was also seen perched above the south side of the Nethermead Bridge so apparently at times will stray. Good Luck

A Confirmed search of the office records indicate this is Prospect Park's first Varied Thrush.

Photo of Steve's camera with VATH , taken by Rob Bate: 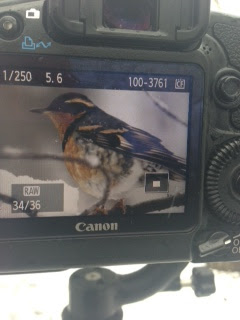