There was good activity in spots today.  The feeders had the usual suspects and the lake hole by the Penninsula also the usual gang.  The Red-breasted Merganser was there and by my photo it appears his upper bill tip is broken off which somehow may account for his continued presence. 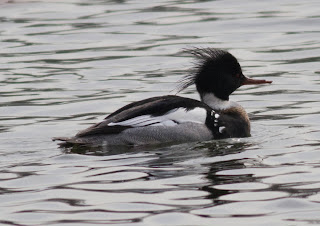 Other birds of note.  40 Crows gathered and flying around Quaker Cemetery hill but no sign of an owl or hawk drawing their attention.  Brown Thrasher in woods by path on the west side of Three Arches Bridge.  Rusty Blackbird feeding with sparrows and Red-wings on path from Breeze Hill to Lakeside.  As I was leaving the park I saw a Red-throated Loon flying over the park. 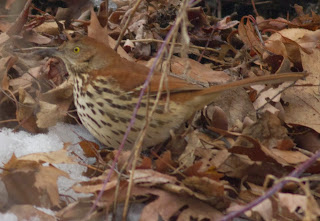 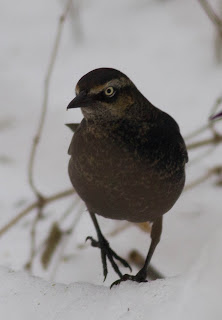 A Twitter tweet from Dennis H, reported rare RED THROATED LOON. Along with Bobbi Manian, the loon was observed not too high , just a bit above the trees of the southern Lake shore where it made several circuits but never descended, obviously due to lack of open water .A terrific sighting for the park.Records search tomorrow.

Over in Greenwood Cemetery,the RED HEADED WOODPECKER continues at the beginning of Battle Ave, per Rob Jett's Twitter tweet
Posted by Kingsboider at 4:58 PM