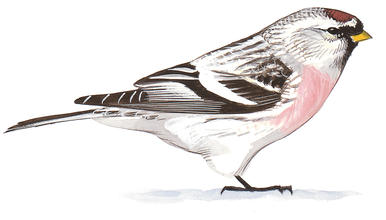 The celebration of the new year traditionally undertaken by birders getting a quick start on thier year list started off well. Greenwood cemetery did its part with COMMON REDPOLLS. Prospect park also helped with a double billing of ICELAND GULLS for the BBC NYD walk.

COMMON REDPOLLS gets first dibs for this nomadic winter finch. One has to get lucky with this small species that move around. But you can increase your odds looking for trees that offer food during the critical time.Like hyperactive chickadees,Redpolls fall along the same line as food crazy to combat body heat loss.

In the highly sought Sweetgum trees were found redpolls in Greenwood. Rich areas at Southwood and Locust or Union Avenues,Dell Ave at Dell wood path and nearby Winter green path and north of Crescent Water by the Winter Boardwalk all produced finds. These sightings were few numbers. though Birding along South wood Ave seems to do the trick with all its sweet gums.

A PURPLE FINCH was reported at Dell water where a CHIPPING SPARROW also fed in the phragmites.

Meanwhile over at Prospect Lake two ICELAND GULLS were celebrities for the Brooklyn Bird Club walk. One gull was an adult,the other a juvenile.Its rare to get  a rarity on New Years Day,so I'm sure the group was very delighted.

A good first day from what I see..

Posted by Kingsboider at 6:50 PM