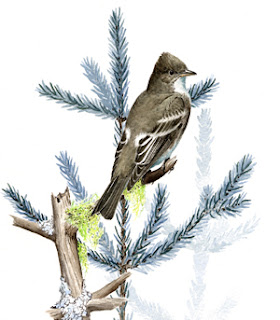 A spate of Mourning Warbler reports even if it's only three is alot of birds for it's rarity. That was the case this mourning erg morning.

At 623 am Dale Dyer texted me he had a Mourning at Quaker Ridge opposite Lookout Hill. A few hours later Ed Crowne heard two unseen such birds - one at Maryland Monument and later still at the top of the Tunnel Arch stairs north of the Midwood. It's likely two birds but two is plenty at the same time.

Meanwhile over at Greenwood cemetery it's FLYCATCHER day. Two OLIVE SIDED FLYCATCHER S with a nearby ALDER FC supplemented a YELLOW BELLIED FC. The insects must be in fear of their lives!