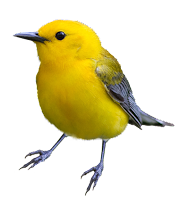 This past Sunday I watched a PROTHONOTARY warbler in its swamp habitat. But that bird was 400 plus miles away. Today,my second PROTHONOTARY within three days was just a stones throw from my Tennis House office building. Therefore I got two different perspectives of a breeding bird and the other still migrating,a cool thing to think about.

I came home yesterday afternoon after a very successful and enjoyable extended weekend trip to the Great Dismal Swamp in southeast Virginia. I observed a PROTHONOTARY along the boardwalk Cypress trail. It was one of several PROTHONOTARIES my group found.

Today at the flooded road dip on the north side of the Tennis House Paige Linden found the migrating PROTHONOTARY at the water edge. When I went there on my lunch hour I found several waiting birders on the bench hoping for this bird to appear. It was Rob Jett who spotted the bird minutes later  in low Ash branches above the road junction. Charles joined in and we three had great looks at a very golden bird.

Rob also heard BAYBREASTED that Paige mentioned as well, WORMEATING,CANADA , TENNESSEE and female BLACKPOLL in that asphalt watery spot. I only saw the latter as the up above CANADA was setting speed records and the rest too far.

Good to be back home

Posted by Kingsboider at 7:37 PM