Dennis tweeted a report this morning that the 2 CBC CACKLING GEESE (CAGE) were still present today,by ladder # 15 on the lake shore.I presumed its the west side RE ladder.

From Dennis's Facebook, note the small goose in the digiscope photo 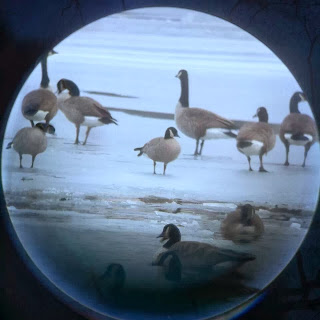 Mid morning, the CAGE were not seen. Likely traveling with flock.either GWcem or likely the Parade Grounds.

Late afternoon update: no sign of the Cacklings were seen despite a search of lake and parade grounds. Its possible they flew the coop after bad weather passed..I will keep you posted if they resurface..
Posted by Kingsboider at 8:28 AM