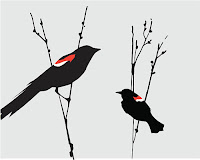 After my spell along the lake west edge and feeders, I took my route through the Nethermead. From the Mead's center grass ,I found a blackbird flock feeding along Western sector edge near the road. Among 53 starlings , over time as they joined in, 37 Redwinged Blackbirds weree joined by 3 Common GRACKLES. The flock eventually dissolved and moved around as the birds were wary and spooked easily.

Along the Lookout Hill edge o the Nethermead,snow ice melt filled up the super soaked ground. One GRACKLE walked thru a large puddle; 8 Goldfinches bathed beneath an oak tree; Robins were all around. Along the woods edge,I caught sight of a HERMIT THRUSH with White Throated sparrows.

At one of the Center Drive big sweetgums, the Goldfinches were joined by a single European Goldfinch. I'm told by a friend he saw much more of the latter at the Well house Sweetgums. I'm not surprised with the growing numbers as this hardy european species cause it has plenty to eat.

Venturing farther,I stopped by the Upper Pool. A single drake GADWALL was sort of a surprise there.

The lake continues to host both Hooded and Red breasted Merganser. However there was no sign of the Ring necked Ducks. ButBu did see 2 hen American Wigeon along the west shore and an impressive 132 Northern Shovelers
Posted by Kingsboider at 8:26 PM