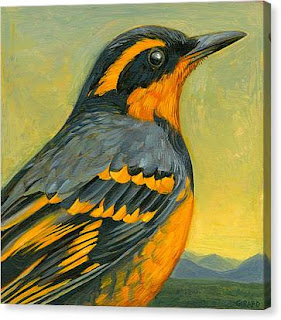 There's a folklore saying that says lighting doesn't strike the same spot twice. I googled that and it said:

TRUTH: The old saying that 'lightning never strikes the same placetwice' is another myth that any veteran storm observer or researcher has seen nature defy. Lightning can strike any location more than once. In fact, given enough time, it is actually inevitable.

The reason for my analogy is that today a Mega rarity VARIED THRUSH was found in the exact same general area as the last Varied Thrush not long ago. That bird, ironically found by a visiting Washington state birder hung around the Nethermead (3Arches) Bridge. Weird,huh?

Today's Varied Thrush found by Brad Luckhardt who showed his photo to local birding maestro Rob Jett late morning , appeared within the Binnen pool woods on the Nethermead Bridge south border. I presumed it was along the creek that runs parallel to the bridle trail was its territory. Rob had to search for the bird and found it in the same area,perched high in a locust tree. I'll find out more later. 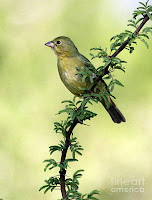 If a Varied Thrush isn't enough on the same day, theres a second strike,another mega rarity showed up in Brooklyn Bridge Park. Local patch bird Heather Wolf pulled off a terrific find with a female PAINTED BUNTING a real " greenie" at Pier 5; later Charles Tang refound the bird on a back path on the edge of pier 5.

On a lesser note ,still rare anywhere,an ORANGE CROWNED WARBLER was observed atop the Lefrak Rink greenroof. Bob Oneill reported it near the Zamboni steam pipe ,surrounded by a short steel fence. ( The southern chimney we call it affectionately the French fries pipe)