Here is a note from Steve Nanz who is spearheading the Save Ridgewood Reservoir for Brooklyn birders for anyone who is willing to show support saving this critical bird habitat on the Brooklyn-Queens county line. Steve ,along with his wife Heidi and Citybirder Rob Jett have been in the forefront of the fight for many years. Please do support whether by attending the meeting ( previous post) , Verbally or writing letters. Attached within the note below from Steve is the link (IN BLUE) detailing the whole scope of the Reservoir and why it should be saved. A secons link at the bottom has a sample letter to send or mail. The more letters the more it might sway NYSDEC Kenneth Scarlatelli, Natural Resource Supervisor and Commissioner Basil Seggos.

Dear Supporters of the Preservation of Ridgewood Reservoir,
On Thursday, February 22, 2018, we received the excellent news that the New York State Department of Environmental Conservation (DEC) had rendered an extremely favorable draft determination on the wetland status of Ridgewood Reservoir. This report can be downloaded at:
http://www.nych2o.org/uploads/4/6/4/7/4647928/ridgewood_reservoir_wetdel_report__1_.pdf
Though some celebration may be warranted, the fight to preserve Ridgewood Reservoir is not yet over. We need your help as we enter the home stretch. This preliminary assessment is now open to public comment. The comment period ends on March 22. PLEASE let your voice be heard by sending your approval to DEC Regional Natural Resources Supervisor Ken Scarlatelli and copying DEC Commissioner, Basil Seggos.
As was expected, this long awaited assessment delineates nearly all of both Basin 1 (east basin) and Basin 2 (middle basin) as freshwater wetland. The big surprise was that most of the southern half of Basin 3 (west basin) had also been delineated as wetland! Basin 3 was under the greatest threat of being developed in previous plans by the NYC Department of Parks & Recreation (NYCDPR). For years, staff of both DEC and the NYCDPR disputed that wetland habitat even existed in Basin 3.
It is critically important that we show support for a formal determination to map all three basins at Ridgewood Reservoir as Class 1 fresh water wetland with emphasis on Basin 3. It is not impossible for Basin 3 to be excluded from the final wetland delineation. Indeed, the uphill fight to preserve the Reservoir has been fraught with unexpected twists and turns. Recall that even as the sports facility proposal for Basin 3 appeared to be fading, an unnecessary plan was nearly implemented which required the dewatering of Basin 3 and building a road through the Basin 3 wetland as a part of a dam reclassification program. Were it not for your support then, the wetland in Basin 3 would now be gone and at a cost to tax payers of a projected 6 million dollars.
In addition to sending letters of support, please try to attend the March 5 meeting at 7pm at the Redeemer Lutheran Church in Glendale and please pass this along to others. DEC and NYCDPR need to see that support has not waned over the years and that it is as vigorous as ever.
Last year NYCDPR drafted an application for Critical Environmental Area designation. The wetland in Basin 3 was omitted from the mapping. We successfully argued for a delay in submitting the application pending DEC wetland determination. So not only will this determination affect protection of Basin 3 as a wetland, it will also affect protections offered by the Critical Environmental Area designation.
Thank you for all your past support without which we could not have achieved these near impossible successes. With these protections in place, I think we can declare total victory and Ridgewood Reservoir may finally be developed as a Nature Preserve, Historic Site, and Educational Resource without threat of future exploitation.
A suggested letter of support is available at http://www.nych2o.org. For additional information visit http://ridgewoodreservoir.blogspot.com.
Addresses for DEC:
Kenneth Scarlatelli, Natural Resource Supervisor
NYS Department of Environmental Conservation
4740 21st Street,
Long Island City, NY 11101
Basil Seggos, Commissioner
NYS Department of Environmental Conservation
625 Broadway
Albany, NY 12233-1011
Best Regards,
Steve Nanz 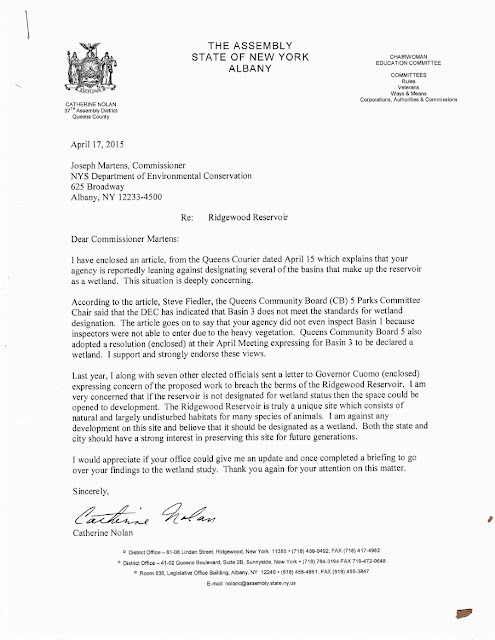 Proposed Amendment to Wetland Maps
Notice is hereby given pursuant to Article 24 (Freshwater Wetlands Act) of the NYS ECL and 6 NYCRR Part 664 that New York State Department of Environmental Conservation (NYS DEC) proposes to amend Kings County Freshwater Wetland Map 2 of 6 and Queens County 4 of 10 to include the boundaries of Class 1 wetlands of unusual local importance located at the Ridgewood Reservoir. Maps showing the proposed revision are available at the city register and county clerks offices for Queens and Brooklyn as well as at the NYS DEC Region 2 Office, 47-40 21st Street, Long Island City, NY. An informational meeting will be held on Monday, March 5 from 7:00 p.m. to 9:00 p.m. at the Redeemer Lutheran School, located at 69-26 Cooper Avenue in Glendale, Queens.
Written comments on the accuracy of the proposed changes to the maps may be mailed to the contact person listed below through March 22, 2018. No activity subject to regulation under the Freshwater Wetlands Act may be initiated without a permit from NYS DEC within the area that is the subject of the proposal (including the 100 foot wetland adjacent area).
Contact: Ken Scarlatelli, NYS DEC - Region 2 Office, 47-40 21st Street, Long Island City, NY 11101; Phone: (718 )482-4020.