Sorry for an out of range bird posting but I just had to show it...

From my 2 day trip to southern/central New Jersey," the bird" ( my third XTFC lifer in last 2 years)  from Whitesbog  [ http://www.whitesbog.org/ ] which I saw the 3rd time yesterday as I was driving out the parking lot of this formerly large cranberry farm , now a living museum and blueberry farm as well as a terrific shorebird spot which I saw Bairds Sandpiper and at least 20 Solitary Sandpipers and in the tern dept 18 Gull-billed terns , many sitting on the ground in the drained impoundments. I will post stuff to my facebook page in time scenery pics. (Got 20 species shorebirds, by the way, mostly at Edward G Forsthye NWR or old name "Brigatine" )

The photo below was taken by Shari Zirlin, whose husband Larry I birded with both mornings (Sun, Mon) , both the original finders of this Scissor-tailed Flycatcher, there for a week now at Whitesbog. 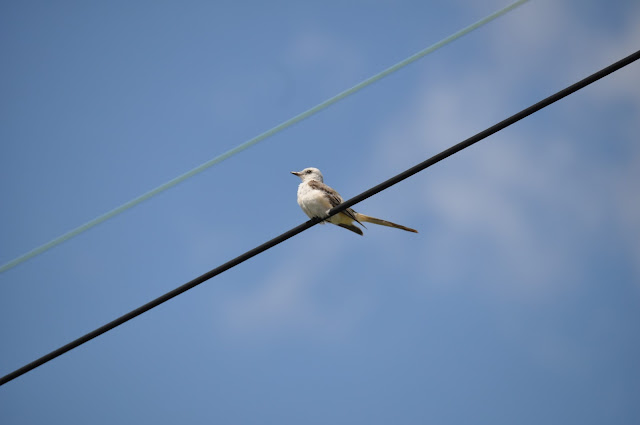