The warblers pulled a fast draw, after an early morning initial report of 21 species reported by Ryan on Lookout Hill.

Ryan G reported 21 species warblers birding from the Wellhouse up to the Lookout Hill summit. Included were BLACKBURNIAN, CAPE MAY, TENNESSEE AND BAY BREASTED. But when I arrived there on my lunch hour, nary a warbler I could spot. They all disappeared.

While up on the hill,Lenny G tweeted a CANADA WARBLER seen well at the Esdale Bridge. Since it was dead up on "boot hill", why not? It's a new year species for me. So on the quicken pace I go and I arrived at the Esdale Bridge where a few other birders were posted. Sam pointed out the CANADA  flying back and forth across the creek right below the bridge's west side: gorgeous looks at a very close warbler. Then about 5 minutes later, Sam also pointed out a WILSON'S WARBLER on the south side of Esdale, perching upon various limbs where I was able to catch up with the fast bird and see it .So thanks to Sam for getting me two new warbler year species. 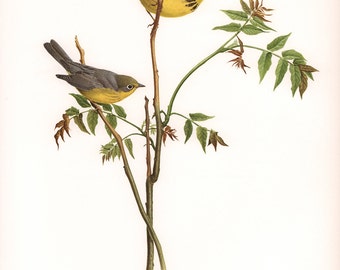 Posted by Kingsboider at 3:25 PM