Following up on Kathy's late afternoon report of the juvenile Common Gallinule at West Island, and since it's on my way home anyway, I decided to take a peek. What I got was an elusive  gallinule. 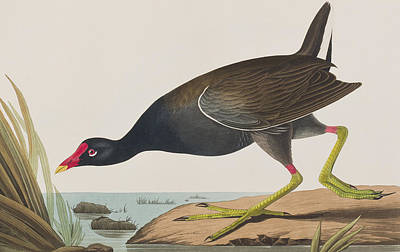 Starting near the rustic shelter where already some birders were looking, I scanned and found no bird. So, over to the benches at the half moon spot opposite West Island north tip. There I looked along with a photographer acquaintance who took a photo of the gallinule wading away towards the Hammerhead peninsula. Both of us proceeded over there. And again, no bird! Where the heck did it go ? I searched along the whole peninsula at that southwestern shore all the way to the Three Sisters Islands and still no bird. We stuck around for a half hour looking.

So I've come to a conclusion: you cant trust those mischievous teenagers.....

By the way, since its been overlooked by the water bird, theres been a bright male HOODED WARBLER in the north Lullwater just past the cove.This according to reports from Elyse , Rob Bate and Will Pollard the last two days. I'm hoping that bird isn't elusive
Posted by Kingsboider at 7:22 AM