The two CACKLING GEESE remained in Prospect , first seen in the Canada Geese flock off the Hammerhead Peninsula right tip, then fleeing with the flock to feed at the Parade Grounds late morning.

I reported the Cacklers in an an morning tweet. Quite close to the shore line between Three Sisters and West Islands, their small size, and silvery contrasty backs (with their black tails) stuck out prominently . Late morning found this flock feeding in the Parade Grounds along Parkside Ave in the adjacent field to the Tennis Center , reported by Richard Payne. So if one doesn't see the flock at the Lake, go south across the street for Geese foraging there at the Parade Grounds.

There was no early sign of the Gallinule. But it appears this bird is no early bird, deciding to come when it warms up, I gather.

Regarding other sightings, a few ducks to report.  In the Lower Lullwater on the south side of the Terrace Bridge, a mixed pair of GADWALL fed with the Mallards and a nearby GREAT BLUE HERON. At Boathouse pond, a hen AMERICAN WIGEON did likewise, re-appearing on the west side of Lullwater Bridge. 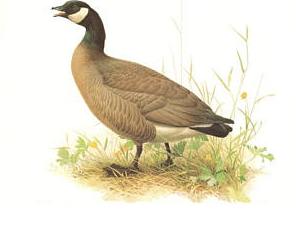