Both Greenwood Cemetery and Prospect Park today culminated with fantastic rarities each . The spectacular finds for me on a non birding family day was.. well totally unexpected and quite satisfying.
Having missed out last fall with Evening Grosbeak when they came thru in Greenwood,today I nailed the sighting. Thanks to Brandon Stinchfields find yesterday, a mob of birders descended on Landscape Avenue above the northwest slope of Sylvan Water ( at the Cliff Path west ) to find a bright breeding male Evening Grosbeak feeding on newly sprouted elm leaves.
With my Mom (  I bought along to enjoy the flowering trees) I left behind in my car, and help from on site birders who helped kindly locating it, I watched this bird fly around the elm with big white wing patches. It's a terrific looking bird!
Then this morning Prospect had to show off too. A birder named Bill came through with a bird so well camouflaged that I couldn't figure out how the heck he spotted it; an EASTERN WHIPOORWILL-- identified and confirmed thru a scope later by Richard Payne --spent the day perched near Boulder Bridge. Bobbi M told me where in Greenwood and so figuring it wasn't moving till nightfall,I went for it.
Max Epstein showed me when I arrived where the WHIPOORWILL was perched. It took me a good ten minutes to locate it in my scope ; which the scope stayed in one position for a good hour for other birders coming by.Thanks again to Max and birders for the second prize.
The Whippie spot was a dense Osage orange tree on the north slope up from the bridle trail on the north side of the Boulder Bridge. It was perched at the top area of the Osage.I believed this was the same tree that might have had a Whippie 8 or so years ago.
Way to go birders! 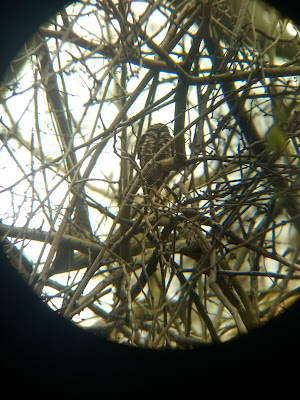 Posted by Kingsboider at 6:24 PM