A day at the water 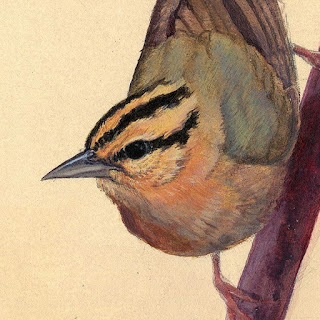 Before thoughts turn to  a day at Coney island beach,it was instead Prospects watercourse that had the good birds today.

First,PROTHONOTARY WARBLER was a star attraction at the Ambergill. This creek between Esdale Bridge towards the Ravine served as the backdrop for this beautiful bright golden plumage bird with a little orange hair turf. Why with its performance today for it's audience,it could win an Oscar!

There was a second report of PROTHONOTARY across from the Wellhouse at the boat ramp according to Adelia. It's likely a second bird.

The next water hilight is Ed Crowne credit,finding WILSONS SNIPE. A turtle resting spot,Lullwater cove across from the rustic arbor held the bird seen near the cove mouth. Best viewing was at the overlook platform. When I went in early afternoon ,the snipe rested on land behind a unsprouted shrub,on the right side. A great sighting.

Last,at Upper pool, there happened to be WORM EATING WARBLER. From reports I read,it sounds like the back path where at one point a good crowd gathered to observed this handsome bird.

In other news,a report of BLUE GROSBEAK emanated from Fort Greene Park.The bird focused on the north lawn.

Finally,a Summer Tanager at Green-Wood Cemetery, between the end of Cypress Path and Laurel Path, along Lawn Ave
Posted by Kingsboider at 7:38 PM