On this Earth day when we consider conservation and reuse,recycle and more,birding is a good way to see results. A generally quiet day ensued with recurrent species in Prospect and Greenwood. 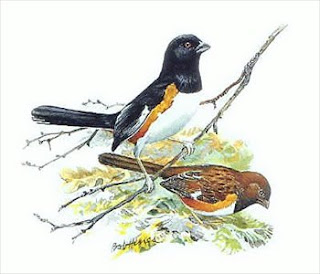 Prospect continues as usual with the two YELLOW THROATED WARBLERS. And again,it's the two bridges- Terrace and Lullwater- the main draw. Terrace bird was singing but more erratic; the Lullwater bird is the more congenial bird,showing well in the Larch tree at the bridge end. It was also observed picking off insects from the Boathouse wall and facade.

In Greenwood Cemetery,BLUE GROSBEAK made an appearance for today's BBC Walk led by Ed Crowne. Its I believed seen at Sylvan water east.

A LOUISIANA WATERTHRUSH was reported by Olin at Lily Pool.Along the Bridle path by here,a few EASTERN TOWHEE showed up. The latter species also was seen in the Ambergill.