Every Saturday on Prospect's Breeze Hill there is Smorgasbord Day. But here plus Greenwood Cemetery ,birder partake in Smorgasbirds,and it's been a nice day with quality birds. 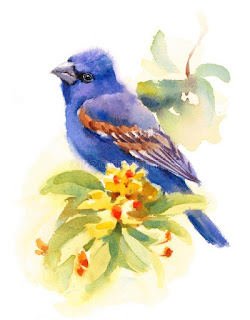 For good quality, Greenwood's east slope Sylvan Water and today's Valley Water provided the backdrop. The BLUE GROSBEAK put in its brief appearance along the Sylvan  road that starts to rise,in a tree before it flew uphill. I didn't see it after the takeoff.However a cooperative EASTERN KINGBIRD alighted on a weeping cherry there where PALM WARBLERS and YELLOW RUMPEDS practiced their aerial display.

The SUMMER TANAGER on the other hand moved to a new location.Found along the eastern shore of Valley Water,it acted like a hyperactive flycatcher,zipping back and forth among the trees on the shoreline.Valley Water is the pond beyond the large chapel. I figure the tanager was making me dizzy so I succeeded just watching one tree where I observed it several times. Nevertheless a good number of birders had thier Smorgasbirds moment with the SUTA.

Louisiana Waterthrush put in a good presence this morning. These are the locations found in : Sylvan water western shore,Dellwater, Prospects Binnen Pool,Three Arches.

Rusty Blackbird had its own spot at Dellwater as reported by Joe Borker.Two INDIGO BUNTINGS were found in the cemetery- one a brigh male at Crescent Water.

The YELLOW THROATED WARBLER extends its own remarkable stay in Prospect. The bird at Terrace Bridge on the south side has been there so long,a true loyalist. The Lullwater Bridge bird was spotted by Dennis BBC Walk and visits mostly the larch tree at the bridge end. There's conclusive acceptance there likely are three Yellow throated,with the third bird at West island,quite a notable occurrence.

Other reported birds worth noting occurred in Prospect. Prairie Warbler continuing at Lower Pool backwater is a now a remarkable streak. A Ruby throated Hummingbird at Three Arches was observed.
Smorgasbirds Saturday is looking good for the next several weeks.

PS. Please note as the peak season approaches,it would be impossible to credit observers in my posts unless it's a super rarity. Its tough to absorb all the large information amount.

Posted by Kingsboider at 7:04 PM