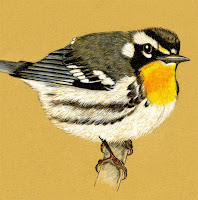 Some of us older folks remember the old days when vinyl records use to skip and play the same note over and over again. That's the theme I'm seeing with the two still present YELLOW THROATED WARBLERS in Prospect, still loyal to those two bridges..until one decided to skip to a new spot.

Both the Terrace Bridge and Lullwater Yellow throateds were seen and observed this morning. Though I tried without luck for the Lullwater bird (again), they are both there. However, the Terrace bird was on the move. Ed Crowne heard the bird along the shoreline south of the Terrace bridge. Then around 1 pm, Matt Beck reported the Yellow throated at the Peninsula tip (Wow, THIS IS NEWS!). The Lullwater Bridge bird has been according to Brad V making a circuit of the Boathouse pond, sometimes at the Boathouse area, then back.

Some other warblers , one new for the season came around. The new species is BLACK THROATED GREEN, seen at the north end of Butterfly Meadow (Bate). A YELLOW and a NORTHERN PARULA were reported at the Peninsula tip (Brawer). Two NORTHERN WATERTHRUSHES it seems had arrived at Binnen Run --behind the music pagoda, then the Binnen Pool, while another seen at Lower Pool (Crowne).Two PRAIRIE sang at the Peninsula tip as well, that locale looking like a hotspot there today.

Above Lookout Hill, a high flyer BROADWINGED HAWK  was spotted by Karen O.The sky was also shared by some CHIMNEY SWIFTS as well; and last WINTER WREN put in an appearance at Lower Pool.

Over at Greenwood Cemetery, a new record with the BLUE GROSBEAK. It still reigns at Sylvan Water. Tip the needle please....
Posted by Kingsboider at 3:25 PM