Bird of the day was.. an enormous Virginia Opposum by the path from GAP to the Rose Garden!

From Rob Jett , on BICKNELL'S THRUSH account and map


This morning Heydi and I were birding in Green-Wood Cemetery and came across a Bicknell's Thrush. We were walking down a steep path on Ocean Hill towards the "Catacombs". There's a stand of conifers at that spot. A few Hermit Thrushes were in the area, but a gray-cheeked-type thrush was on the path beneath the pines. The bird had very noticeable rufous-colored tail feathers and primaries. It did not pump its tail. It quickly spooked and hopped over the hillside, out of sight before either of us could take any photos. We decided to play a Bicknell's call. The bird responded immediately, coming back over the hill and perching briefly on a pile of broken branches to the left of the path. The bird assumed an alert posture, stretching its head out. As we continued to play the call it came closer and closer, eventually flying into a multiflora rose shrub a few yards away. When we stopped playing the call it dropped down out of sight. Heydi suggested playing Gray-cheeked Thrush calls. We played it for about a minute but the bird didn't react. We switched back to Bicknell's Thrush and the bird immediately emerged from the shrubs and walked out onto the path in front of us.


Here are some photos:

The bird was on Vine Path, which ascends Ocean Hill from in front of the Catacombs at Grove Ave. Here are the coordinates: 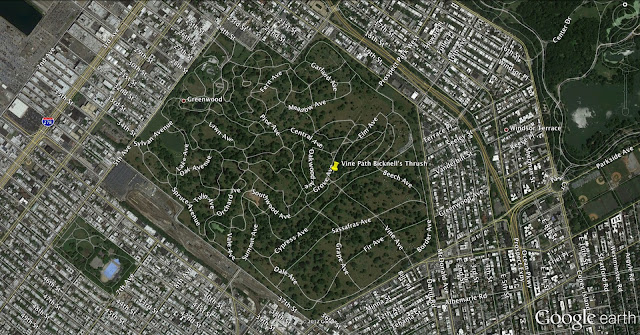 This morning I can report a Belted Kingfisher, pair of Am Wigeon and 13 Northern Shoveler at the lake. Flock of Sparrows on the Peninsula lawn, nothing unusual that I could see. Another group in the wildflower meadow by the Upper Pond included a Field Sparrow. Had good close view allowing me to check off all the field characters described in Sibley. 2 Eastern Phoebes there too, and at least one more at the Peninsula. But most birds were lying low because of the wet.


Keep up the good work!

Best wishes, and thanks again,

Posted by Kingsboider at 8:58 PM