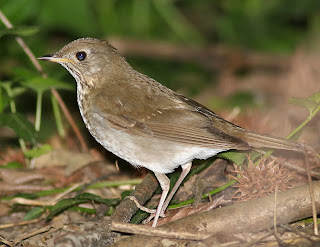 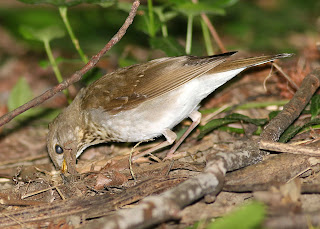 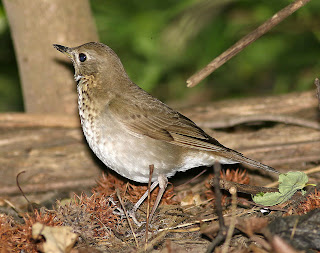 I wanted to report in on my experience with the Bicknell's today, and also give you a couple of photos to post, if you'd like.

Today I went in late AM and ran into Mira (Mira, please forward to Jane and Andrew if you think they'd be interested), Kathy, Andrew, Jane and Alexandra, who had all seen the bird.

We had a couple of fast sightings until it finally emerged and we watched it sing, confirming the ID.The Bicknell's shots attached are of the bird that sang.

We had heard about a bird with very white wing spots, and had seen a flash of that earlier before the bird really emerged. The bird we eventually confirmed had very small greater covert spots, but nothing bright.

Later in the AM (after the Blackburnian), I went back and found a Gray-cheeked Thrush also in the same area. This bird, with photos attached, is obviously different; the bill base is darker (the gape seems yellowish in one shot but the mandible is mostly dark), and it is missing the covert spots of the Bicknell's.

When this bird turned around, however, it had a very bright white loose feather in the covert area, which at one point stuck up, but looked mostly like a white line. It was only visible on the right side. The left was normal. Unfortunately I couldn't get a picture of it from this side.

There was also a singing and calling Swainson's Thrush in the same area: thrush alley as it were.

Anyway, hope this is of interest. It's great this bird has been willing to hang around for so long!