Karen O'Hearn at Army Terminal Pier 4 in her note below to Facebook Brooklyn Urban Birders:

Josh Malbin found this Glaucous Gull at 58th street pier today.  And what do you know - it happened to be hanging with my old friend C47, who I saw last year on Feb. 20th in this exact spot.   I'm almost as excited about that as I am about the Glaucous.  Herring Gull C47 is 11+ year's old! 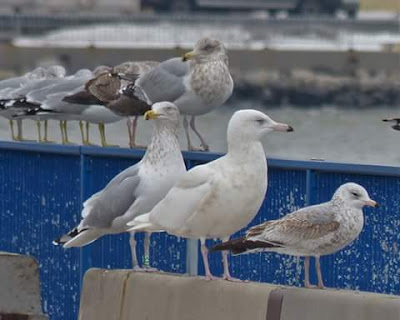 Update: Im passing along a note from Joshua Malbin regarding the Herring Gull band C47, one next to the Glaucous Gull

Joshua Malbin Passing along a comment about C47 from the North American Gulls group, from Julie Ellis, who banded it on Appledore Island in Maine: "This one has been seen many times both on and off the island. After being banded as a chick in 2005, it was first observed again on Appledore in summer 2008 roosting on a building. Every year from 2009-2013, it was seen on Appledore and in coastal NH. In Jan 2014, it was seen near a sewage treatment facility in NY and in Feb/March 2015, was seen in Brooklyn then near Inwood. So, it seems to visit NY in winter!"