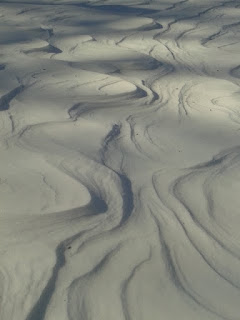 The record setting blizzard motivated some personal snowshoeing, that also creates the fun part of birding while on those "rackets". With the primary enjoyment today the snowshoeing experience, I did nevertheless picked up some good birds.

As by coincidence all that snow did bring in a snow species : 2 SNOW GEESE. Resting on the ice at the outer fringe of the sizable Canada geese flock, both tucked in sleeping Snow Geese eventually woke up. After my first tweet, about several minutes later they took off. They figured the snow ended, they might as well beat it, Canada's too honky and noisy.

Among other water fowl ,special was a lone hen AMERICAN WIGEON gliding among the NORTHERN SHOVELERS. I didn't see any sign of the RingNecked Ducks I saw on yesterday's challenging snowshoe hike.

The other good bird on my hike occurred at south Breeze Hill.Despite numerous winter revelers passing by, midway up my ascent that road, an AMERICAN TREE SPARROW ,accompanied by a single FOX SPARROW, kept coming to that spot at the snow slope edge.

There was a report of a high flying BALD EAGLE today.Klemens Gasser spotted it, and I heard that all the gulls went manic. Well, I can't get them all.