Today is "boom" day, a term I personally coined for the big numbers dropoff the day after a fallout . Yesterday's tremendous surge of birds , mostly in the form of warblers, simply diminished today. But one shouldn't get spoiled by our love of warblers; there's other birds worth cherishing during migrations.

Early this morning , as I walked through Lookout Hill, I could see very little activity. I remarked to my friend Ed Crowne yesterday that with the evening southwest winds ( Tuesday), the lagging birds will simply keep on going without stopping in. Because its a desperate time for the male birds to hurry north to establish their territories with competitive males for the female's hand- erg, wingtip-they are not stopping at all. Of course some will drop in , those exhausted birds that ran out of fuel. Rafael Campos recorded for example 14 species warblers today even though he had to work for them.But scattered around are warblers, you simply had to find them.

Most outstanding for the warblers was a MOURNING WARBLER. The observers were Gayle and Xandra who happened upon the bird at the north Midwood border with Ricks Place, along the curvy short step stairs. Rafael was informed by both ladies but was unable to find the Mourning.

While warblers took a back step with their presence, however other good birds stepped forward to the stage. The most glaring sighting occurred over Music Island where a pair of flyover AMERICAN BITTERNS --heading northeast--was spotted by Rob Bate. Then a report of a sitting COMMON NIGHTHAWK got my attention, a bird spotted by Molly Adams. This nighthawk sat on an angled oak limb at Lookout Hill's northwest stairs near the top, I gatehred by the corner to the summit. Maybe its the other end. 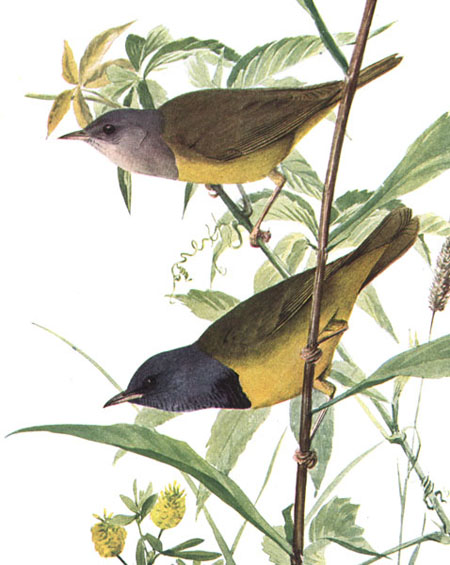 Continuing with good birds, add in GRAY CHEEKED THRUSH ,  BICKNELL'S THRUSH , YELLOW-BELLLIED FLYCATCHER and OLIVE SIDED FLYCATCHER for park observations. Joshua M reported the Gray cheeked at south Rose Garden and Aralia Grove, and south Midwood by Center Drive where the Bicknells accompanied the 1st Gray cheeked.  I don't have details on the Yellow-bellied FC but its in somewhere.Olive-sided appeared at Butterfly Meadow (JMalbin) and north end of Rose Garden ( Paige Linden Brams).

I did get a great sighting that Eni found for me at slow lunchtime. In the water just before the Ambergill Pool, Eni found an immature RED TAILED HAWK belly deep in the stream. We all found this quite whimsical till we thought it was in the "pool" to cool off. We should have thrown in an inflatable donut floaty , huh ?

A hot day tomorrow;bird early for the remnants of anything held over from today.
Posted by Kingsboider at 3:38 PM