under a cloud,saturdays nice variety of birds

Under the spectre of an ugly incident involving a crazed dogowner  attacking and robbing a birder in the Midwood ( see previous post),Saturday birding yielded a nice variety of birds. From the rare warblers to flycatchers and even out of season buteo, this nice cool day had its good offerings for birdathoners and birders alike. 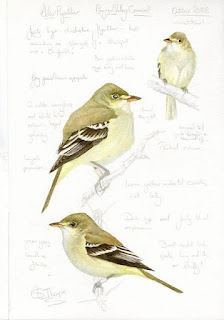 KENTUCKY & MOURNING WARBLERS continue to delight and tease birders.On this day,the Lullwater cover is the scene of intense focus. The Kentucky refound by Ed Crowne caught his attention at the West side of Lullwater bridge. In the brush just east of Lullwater platform, it didn't offer alot of views but nevertheless seen by the lucky few. But at the Cove platform to the downward left in the peninsula on the cove left shore,a really skulky MOURNING WARBLER sang away the morning. I ventured late there but the platform occupied by two marijuana smoking individual s,I moved down trail lest I be having hallucinations of multiple rare birds. I had no luck.

However a few flycatchers-- empidonaxes-- got birdathoners attention.The continuing calling ACADIAN stays put in Ricks Place.But a calling ALDER was heard by Rob Jett on the Peninsula thumb; the ensuing tweet bought in a number of birders looking to add this prize for their day list.

The rest of the day featured unusual species.Dennis H walk " down a doodle"  group recorded out of season RED SHOULDERED HAWK;late SNOW GOOSE & AMERICAN COOT at Prospect Lake
Posted by Kingsboider at 9:25 PM