While the whirlybirds took the big stage, somehow , about 17 WOOD DUCKS didn't get spooked, staying put at the Lower Pool. Reported first by Elyse Taylor, the Woodies  were spotted from the Long Meadow fence side, thru a small opening in the brush, resting underneath or by the willow tree, snags in the water concealing their presence. I was able to count at least 16.

CHIPPING SPARROWS stuck around in the Sparrowbowl, whereas Klemens Gasser reported over 100 along the western fringes of the Long Meadow , between Bandshell and North
of BBQ area of Picnic House. Among them on my observation were WHITE-THROATED SPARROWS when I saw them with my smaller flock of 35 .Nothing else unusual though its tough to ascertain when the small sparrows are hunkered deep in the grasses.

In addition to other notable sightings, RING-NECKED DUCKS and a BRANT were seen on Prospect lake.     Observers were Rob Bate & Klemens 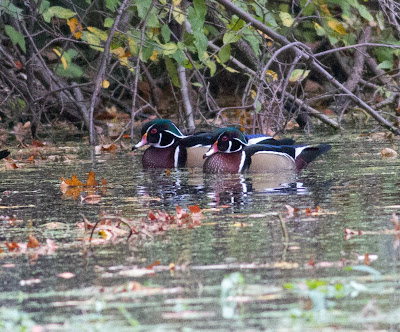 Posted by Kingsboider at 8:48 PM