As sparrows begin to dwindle in the coming week even though it' s still looking strong for emberizidae ,we have to start thinking winter birds. This is the time now when winter finches migrate when Canada yonder starts freezing up. 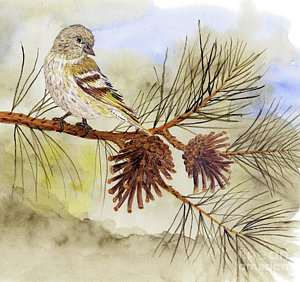 By now, birders are aware Purple finches were already moving in ( I had one along Well Drive. Well,how about PINE SISKINS? This petite streaky species with yellowish wingbars appeared this afternoon in Greenwood Cemetery. In fact,over twenty birds counted by Tom Preston at the Florio path is news ,a flock pointing to an exciting winter for hardy birders.

Sparrows continue to dominate in some spots around the area. I ventured into Prospect after 3 pm and found the Peninsula meadow teeming with CHIPPING SPARROWS and DARK EYED JUNCOS. But the difficulty of seeing these guys was made worse by large swaths of high grass they hid in. Everytime I took a slow step forward the chippies and friends would fly up into the surrounding trees making it impossible to see the hidden buggers. Some gingko fruit collectors came along into the meadow and I watched at least 70 birds shoot upwards like blizzering snowflakes.

There are reports of a few LINCOLN SPARROWS. Reported in Prospect along the Tennis House south border,also others reported in Brooklyn Bridge Park Pier 6; a third specimen appeared in Greenwood Cemetery.

I didn't mention much about CHIMNEY SWIFTS this fall. It's an ordinary species for most birders but what is going on with this Swift's tardiness? Almost every day the past month,its presence covers most of the northern Brooklyn parks. Today 15 were observed over Prospect lake. Also seen at Greenwood,the species eats insects and should be gone by now 🤔.

Enjoy the week of new birding.