Two for Two plus one

When Sean Sime tweeted out his early morning alert that "migrants were streaming up Ocean Parkway towards the park" it was a good omen straight from the birding maestro. It was good birding in Prospect Park with several quality birds to boot.

First up at the bases along the Ball fields western berm was EASTERN BLUEBIRD.Found by Karen Ohearn , with later help from Janet Zinn who took me back to the spot, the Bluebird was perched in a large Elm above ball field number 3. It caught a worm, consuming the delicacy in the elm while Janet, Alan, Toni and I watched the "official State Bird". A wonderful species to watch around this time of year.This was the first of two birds I was successful getting replying to tweets.

The second successful catch was the EASTERN MEADOWLARK. Hanging around from yesterday's observance by Rob Bate, this was a cooperative bird. I didn't see the Lark right away given directions it was near the renown Osage Orange tree ( with the bar in it). I searched for it from the eastern section thru the Nethermeads center. After seeing a perched AMERICAN KESTREL inside the "lawn triangle", thanks to children nursery people pointing the kestrel to me, I walked on towards the eastern area and found the Lark. Sauntering along the middle of the large eastern lawn, the bold bird didn't mind the people near it. Two for Two.

Last before my lunch hour ended, hurrying back to our plant nursery to get more plants, I took a cut through the Long Meadow north section. Seeing a closed off mesh fence area surrounding two water puddles, I thought this might be a terrific opportunity for birds. Getting closer, about ten sparrows were bathing in the puddles. Looking to the left one, I noted a chunky almost dumpy looking sparrow at the puddle edge . Seeing heavy breast streaking , immediately I looked at the face and noticed a bright white eye ring. VESPER SPARROW ! Great, plus one !

The area is close to Roosevelt Knob ,a mound that splits Long Meadow .Its marked by a boulder with a plaque indicating Teddy Roosevelt's association with the Boy Scouts planting trees in that section in 1919. On the south side of the knob, mature Basswood ( American Linden) held sparrows that frequently flew up and down.

Across the path to East Long Meadow,the reseeding fenced off area was alive with sparrows. There earlier, I found a LINCOLNS SPARROW with many CHIPPING SPARROWS.Eni and VInny added FIELD SPARROW in the same location as well.


IN other areas, particularly the western ball fields, Upper Sparrow bowl and woods, numbers of birds held sway. Mostly WHITE THROATED SPARROWS dominated the view, also Songs, flickers, juncos and the usual occupied the grounds. BLUE HEADED VIREO  was spotted in Butterfly Meadow and the Sparrowbowl. A SHARP SHINNED HAWK flew into the Sparrowbowl trees giving fright to the sparrows.

And speaking of Hawks, a good one appeared over at Lakeside. A RED SHOULDERED HAWK, a beauty  photographed by Janet Zinn , was found earlier by Linda Ewing. 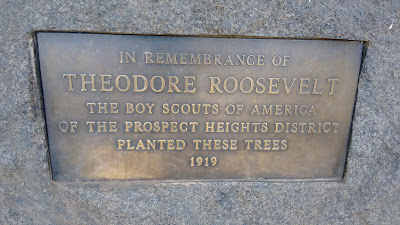 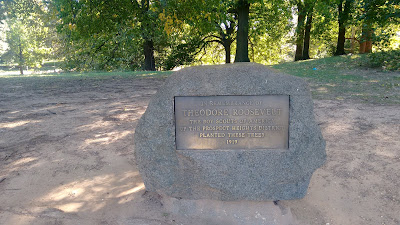 Posted by Kingsboider at 3:47 PM