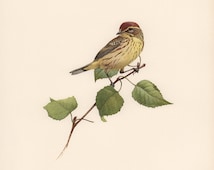 On this dreary cloudy day peppered by sporadic raindrops and a hard work week,it was reasonable personally to take the easy walk birding Prospect Park. With the target bird Blue Gray Gnatcatcher achieved,some other nice birds also made my list satisfying.

The bird of the day continues to be RED THROATED LOON. Mike Yuan' s early morning Twitter tweet placed the bird just off the Peninsula thumb. My arrival late morning was more favorable.From my spot at West Island gazebo, the loon rested calmly near a LAUGHING GULL. It eventually waded and cruised along the western Lake shore where I spotted this loon diving only a few feet from the crumbling rock wall shore. The loon that does look healthy did a circumnavigation -when after my return from birding, now rested in the preferable lake center, this time near a diving PIED BILLED GREBE.

A falcon perched on a tall tree on the Peninsula meadow didn't register immediately to the species with the lousy light. But when it flew,I could tell it was a MERLIN; a cool bird and my favorite raptor.

But my target bird remained the exquisite Gnatcatcher. After a run in with Michele Dreger' s noon walk group, word was she has the species in the Lullwater.I had no success there instead finding twosome GOLDEN CROWNED KINGLETS against crappy light.But as I birded the Ravine, I saw a zipping flight bird go over me and I followed the rapid tiny shape to a large Oak on Elephant Hill. It's my target bird BLUE GRAY GNATCATCHER, joined by a second bird.Its a nice bird to get on this shower filled day.Meanwhile right above me, in the mature White Pine, three PINE WARBLERS made it easy for me  viewing them in and out of the dark pine boughs.

My last active spot ,the reliable Lower Pool back gate came through with a first of season ,at least for me in Prospect. Coupled with another gnatcatcher and RUBY CROWNED KINGLET, a single FOS  PALM WARBLER with its characteristic tail wagging appeared high in the red maple. A few more PINE WARBLERS accommodated the PALM. On the far shore hiding under the green Rhododendron Bush, a pair of WOOD DUCKS could barely be seen.

Also of note ,Kathy Toomey reported an OSPREY over the Lullwater

Many of these are common in season, but each spring remains a welcoming mat to seeing old friends