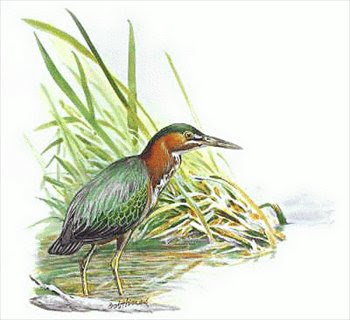 A late afternoon walk in Prospect was somewhat productive, given the above normal temperatures. There were a few warblers besides my attempt to locate that morning mystery bird.

Most appreciated was the  PRAIRIE WARBLER. It landed on the Butterfly Meadow fence. The bird was overshadowed by the dominant presence of three RED-TAILED HAWKS buzzing the airspace up there; at one point all three Redtailed dived sharply to a tree on the south slope.

The last region I went to was the Peninsula. There is where I saw 4 WARBLER species. In order: COMMON YELLOWTHROAT,AMERICAN REDSTART,BLACK WHITE WARBLER and NORTHERN WATERTHUSH, likely the same bird from the morning at the fork puddle. A last nice bird to see ,a GREEN HERON that perched briefly on a tree at the edge of the Peninsula cove.

The wind right now is east- southeast.I don't know how that will fare for Saturday which is supposed to be quite a nice day. Enjoy it.
Posted by Kingsboider at 7:08 PM