likely many Prospect birders have better, maybe from earlier in the day, but I thought I should share at least one image I got as of after 6 p.m. in the Rose Garden area, observing with Klemens Gasser already on-site, and with me, Brenda Inskeep of CT, Manhattan, & formerly, AZ.  Rob Bate & several others also stopped by to watch the late-show, although some of us departed before the late-late show, if there was one.  The least bittern was just slightly active with over an hour to sunset, ruffling up its plumage a few times, & it looked mildly perturbed at some back-up-beeps emanating from nearby Flatbush Ave. & occasional other non-park noises. What a great bird, any time in NYC & am of course curious when the last in Prospect may have been.  This photo made with 48x optical zoom, and thus not really of the quality image as such a quality bird deserves. 'Incidental' thanks to Rob Jett, helping from afar to get the exact position of the bittern to a few late observers, and a huge tip of the birding cap to the finder[s] and further re-finders, too. What a great little bird!  - best to B'klyn migration & what will be next? - Tom Fiore, down from Manhattan.
__________
Least Bittern Prospect Park rose garden area, Sunday May 15, after 6 p.m. - TF photo. 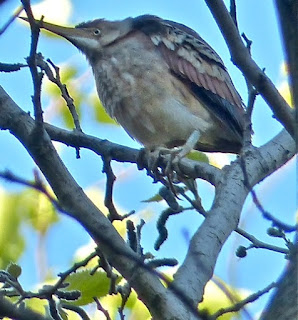